C. M. Carney,Armen Taylor Oct 22, 2021 C. M. Carney,Armen Taylor
Book three in the LitRPG the series The Realms. What the Hell Happened to Lex? All Lex wanted was to help his good buddy Gryph find his sister and maybe save the world along the way. But everything goes wrong from the start when Lex gets separated from Gryph during their transfer into the Realms. Lost, alone, and forced to live the same day over and over, Lex must defeat the agent of a despotic god, uncover hidden truths about himself, and find his way back to his friend. If he fails the Realms face destruction. Killing Time is the sequel to the best sellers Barrow King and The Lost City. It is a tale of adventure, mayhem, and loyalty, filled with crazy action, way too much stupidity, and tons of laughs. Buy now and start this humorously epic RPG GameLit fantasy romp now! Warning: Welcome to your new favorite genre. LitRPG/GameLit is genre that incorporates gaming elements from tabletop roleplaying games like Dungeons and Dragons and Pathfinder with epic RPG video games like The Elder Scrolls: Skyrim and MMO’s like World of Warcraft and sets them in a fantasy or science fiction setting. It generally has leveling, stat tables, character sheets, and skill progressions. If you’re new to LitRPG or GameLit, then The Realms is the perfect place to start. Prepare to lose sleep. You have been warned. The Realms - An Epic LitRPG/GameLit Fantasy Series. Suggested Listening Order Barrow King The Lost City Killing Time Dead Must Die (A Side Quest) Scourge of Souls The Forsaken God Chaos Rising The Ravaged Land 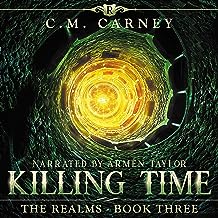